History of wind energy usage for the generation of electricity dates back to the 19th century, but at that time the low price of fossil fuels made wind energy economically unattractive.1 The research on modernWind Energy Conversion Systems (WECS) was put into action again in 1973 because of the oil crisis. Earlier research was on making high power modern wind turbines, which need enormous electrical generators. At that time, because of technical problems and high cost of manufacturing, making huge turbines was hindered. So research on the wind turbine turned to making low-price turbines, which composed of a small turbine, an induction generator, a gearbox and a mechanical simple control method. The turbines had ratings of at least several tens of kilowatts, with three fixed blades. In this kind of system, the shaft of the turbine rotates at a constant speed. The asynchronous generator is a proper choice for this system. These low-cost and small-sized components made the price reasonable even for individuals to purchase. As a result of successful research on wind energy conversion systems, a new eneration of wind energy systems was developed on a larger scale. During the last two decades, as the industry gained experience, the production of wind turbines has grown in size and power rating. It means that the rotor diameter, generator rating, and tower height have all increased. During the early 1980s, wind turbines with rotor spans of about 10 to 15 meters, and generators rated at 10 to 65kW, were installed. By the mid-to late 1980s, turbines began appearing with rotor diameters of about 15 to 25 meters and generators rated up to 200kW. Today, wind energy developers are installing turbines rated at 200kW to 2MW with rotor spans of about 47 to 80 meters. According to the AmericanWind Energy Association (AWEA), today’s large wind turbines produce as much as 120 times more electricity than early turbine designs, with Operation and Maintenance (O&M) costs only modestly higher, thus dramatically cutting O&M costs per kWh. Large turbines do not turn as fast, and produce less noise in comparison to small wind turbines.

A wind energy conversion system (WECS) is composed of blades, an electric generator, a power electronic converter, and a control system, as shown in the figure shown below The WECS can be classified in different types, but the functional objective of these systems is the same: converting the wind kinetic energy into electric power and injecting this electric power into the electrical load or the utility grid. 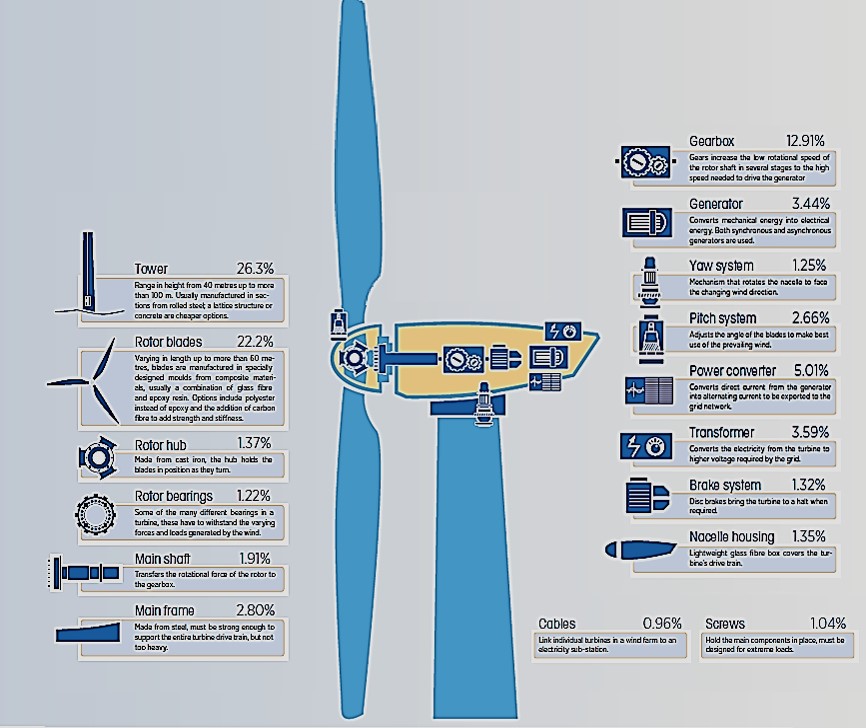 A typical wind turbine will contain up to 8000 different components. This guide shows the main parts and their contribution in percentage terms to the overall cost. Figures are based on a REpower MM92 turbine with 45.3 metre length blades and a 100 metre tower.

Breakdown of the installed capital cost for Onshore Wind Farms

The development of an offshore wind farm normally begins around 5 years before the time when the installation is executed. From the first idea to the start of the project, many procedures, studies and paperwork must be accomplished to ensure the technical/economical feasibility.

These costs are related to:

The project management tasks include all administrative services, pre-feasibility studies, financing, tendering process, internal controlling systems, and negotiating with subcontractors. The total cost of project management is usually expressed as a percentage of the CAPEX. According to Offshore Design Engineering Ltd. (2007), this percentage is estimated to be around the output of the formula shown below in %, i.e.

In order to execute an offshore wind farm development, an authorization by the government or a regulatory body is required. In some studies, the legal authorization process is considered as a part of project management. But since the permitting process is significantly different from country to country, we have separated them from each other in this paper. During the authorization process, appropriate documents are provided and some local authorities are contacted and asked for approval. The cost of legal authorization is estimated to be approximately 0.13 % of the CAPEX (The Crown Estate 2010; Howard 2012).

In order to evaluate the feasibility of offshore wind projects, some site-specific surveys need to be conducted. The type of surveys conducted usually varies according to the kind of information required. Currently, four types of surveys are used for offshore wind farm developments: environmental, coastal processes, seabed and metocean conditions. So, the cost of surveying over the P&C phase is given by:

Csurv-EN, Csurv-CP and Csurv-SB represent the cost of carrying out, respectively, environmental, coastal processes and seabed surveys and all depend on the wind farm’s installed capacity (IC), whereas Csurv-MO represents the cost of metocean studies and is considered to be constant regardless of the number of wind turbines being built.

Once the project is approved and the final investment decision is made, a multidisciplinary team is constituted to design the offshore wind farm. Some of the activities that are undertaken during this stage include structural design and selection of foundation, design of wind farm layout and design of electrical system and grid connection. The engineering cost comprises the costs associated with main engineering activities (Ceng-main) and design verification process (Ceng-verif) (Offshore Design Engineering Ltd. 2007), i.e.

The contingency cost accounts for unpredictable annual expenses and allowance for replacement of the most expensive components subject to catastrophic failure. The contingency cost is considered a certain percentage (around 10 %) of the CAPEX (Howard 2012), i.e.

The production and acquisition (P&A) cost includes all costs associated with the procurement of:

The transportation cost of a wind turbine is calculated by multiplying the average vessel-day required (Nv-d) by the fixed daily rate of hiring a vessel (Vr), i.e.

Cost of the support structure or foundation (CSS)

The cost of a support structure is divided into two parts, one for material cost (Css-mat) and another one for transport and installation (Css-trans). Thus, the total cost of procurement of support structures is given by:

HH and D represent, respectively, the hub height and the rotor diameter of a wind turbine in metres.

For the transportation cost of support structures, it is calculated by multiplying the average vessel-day required (Nv-d) by the fixed daily rate of hiring a vessel (Vr), i.e.

The cables used for power transmission in offshore wind farms are divided into three parts: inter-array (i= 1), export (i= 2) and onshore (i= 3). The cable cost for each part can be calculated by the product of the price of unit length of cable (Ccable-unit), the number of lines (Nlines) and the average length of each line (L). Moreover, J-tube seals, passive seals, bend restrictors, stiffeners or cable mats are required to protect the cables at some locations. So,

Cprotection (£) represents the cable protection cost which varies depending on the number of wind turbines installed. Offshore substations are normally used when the wind farm’s installed capacity (IC) is larger than 100 MW and/ or the wind farm is very far from shore. These substations are designed specifically for each wind farm project with taking into account several factors such as the distance to shore, water depth and, more importantly, the installed capacity. In this study, a linear regression model is trained on our dataset which consists of prices of substations for various wind farms whose capacities range from 300 to 1500 MW and supplemented by data presented in Myhr et al. (2014). The cost of an offshore substation is estimated as follows :

Cost of the monitoring system (Cmonitoring)

Currently, a large number of sensors and control devices are installed throughout the offshore wind farms to collect condition data (e.g. sea-state data, deterioration data). The collected information is frequently transferred to the supervisory control and data acquisition (SCADA) system and is stored in databases. The system analysts use these condition data to schedule the inspection and maintenance tasks. The cost of SCADA and condition monitoring systems (CMSs) for an offshore wind farm depends on the number of wind turbines installed (Tavner 2013). Then,

CSCADA and CCMS represent the cost of, respectively, SCADA and CMS for a wind turbine.

The installation and commissioning (I&C) phase involves all activities related to the construction of offshore wind farms. The costs incurred at this stage include those related to:

The port plays a key role in the supply chain management of offshore wind farms. Annual fees must be paid to local authorities for the use of port infrastructure, quayside docking, and the permission for crane use (Maples et al. 2013), which all are assumed to be fixed and known (Cport-use). In addition, the annual payments to wind farm labourers who carry out project activities (e.g. pre-assembling the components) must be taken into account (Cport-labour).Then,

IInstallation Cost of the Components(CI&C‐comp)

Several operations need to be performed during the installation process of an offshore wind farm project. The cost of installation, according to the type of components installed, is divided into four parts: foundation (CI&C‐ f ), wind turbine (CI&C‐wt), and offshore and onshore electrical systems (CI&C‐ofsubs and CI&C‐onsubs). Then,

In all the above cost elements, the costs related to hiring chartered ships and technicians are also included. In addition, preparation of the seabed is often required prior to installation of the foundations. An offshore electrical system is composed of both the array and the export cables whose associated costs are a function of the total length (distance).

Cost of the commissioning (Ccomm)

Before starting up an offshore wind farm, the wind turbines, electrical systems, SCADA and CMSs are tested to detect early failures and improve reliability (Dinmohammadi and Shafiee, 2013). The cost of commissioning (Ccomm) mainly consists of the costs associated with hiring vessels and crew members which can be calculated using the formulas:

Cost of the construction insurance (CI&C‐ins)

During the installation and commissioning phase, many unexpected events (such as environmental damages) may take place. In order to minimize the negative impacts of these events, various insurance packages are offered to wind farm owners. The cost of these packages often varies in accordance with the capacity of the offshore wind farm and is calculated by: